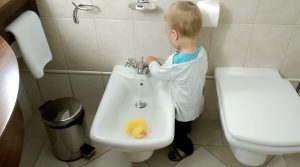 So, I just freed my 18 month-old son from the predicament of squeezing his head in a cupboard so hard that I actually found it difficult to free him from it. Now he is fine, running around in his nappy with just a small mark on his forehead to remind me of his predicament, which I am pretty sure he has already forgotten, as he is currently trying to climb on some furniture he has already fallen off several times already.

It was all so much easier when he couldn’t walk yet, and would not yet run out on to the road at every opportunity, apparently BECAUSE I am always so adamant this is exactly what he should not be doing. Generally, as I currently have my bottom firmly planted on the computer seat I must not worry about him climbing on this chair and then the table and falling down himself, or more likely, destroying my computer in a vain attempt to get hey Duggee to play. The bathroom door is firmly closed so I don’t have to worry about him climbing in to the toilet and drowning, or even “just” tasting the toilet brush.

I guess I will always be worried about my kid now, from him soon falling of his bike to later getting into trouble whilst experimenting with alcohol. As I am a skydiver, I can only hope he does not get into wingsuit BASE jumping, I guess.

As my child becomes increasingly independent the stuff I worry about changes. At least when he was a newborn I could just plop him into his BabyCrate baby bassinet and be sure that I had done the best I could to deal with the risks I knew he was facing at that time.

Already now, not so much.

About the Author: John